Horse (from Tibetan Mun Tan (Wylie smon-thang) which implies prolific plain) is the previous Kingdom of Lo and now some portion of Nepal, in the north-focal piece of that nation, circumscribing Tibet on the Central Asian level between the Nepalese areas of Dolpo and Manang. The Kingdom of Lo, the customary Mustang area, and “Upper Mustang” are one and the same, containing the northern 66% of the present-day Nepalese Mustang District, and are all around set apart by authority “Horse” fringe signs only north of Kagbeni where a police post checks licenses for non-Nepalese trying to enter the locale, and at Gyu La (pass) east of Kagbeni.

Life in Mustang spins around tourism, creature cultivation and exchange. Colt is otherwise called “Tibet outside the Tibetan Border” for it survived the Chinese intrusion of 1951 and henceforth encourages much unique Tibetan culture, in spite of the fact that it is presently politically some portion of Nepal and, aside from a nine km divide from Chhusang to Syangboche (only south of Ghiling (Geling)) as of August 2010, it is cut up by another street connecting it to Tibet toward the north and to whatever is left of Nepal toward the south. Plans require the last nine km segment to be finished in only a couple of years’ chance, which will give, with a high purpose of 4660 m at Kora La on the Mustang-Tibet fringe, the least drivable hall through the Himalayas connecting the Tibetan Plateau by means of Nepal to the tropical Indian fields. (The most straightforward and just generally utilized street passageway, from Kathmandu to Lhasa through the Arniko Rajmarg (or Arniko Highway, crosses a 5125 m pass.) 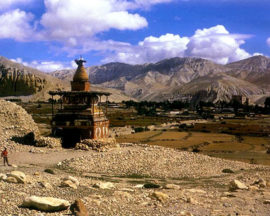 Mustang Trek (Upper Trek) Duration: 18 Days days Price: US $ Ask me
As a former kingdom of Lo, Mustang is in the north central part of Nepal. Since Mustang is used to be the part of Tibet, villages are specially built in Tibetan style with white washed houses, firewood tucked in roofs. Mustang is ...
View Details